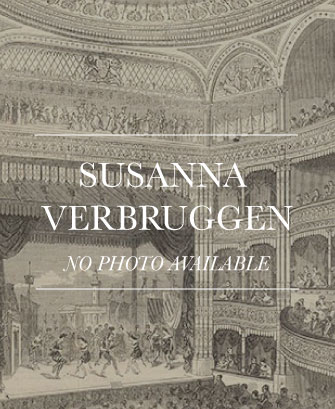 Bio
Susanna Verbruggen was a successful and popular actress especially known for playing breeches roles during the English Restoration. Her acclaim was playing a stock character, the Restoration rake, which was a womanising hellraiser. In 1690, she starred in Thomas Southerne’s play Sir Anthony Love as Lucia who disguises herself as “Sir Anthony”in order to live as freely as the male rakes. In her heyday, Susanna had many breeches roles written especially for her. Letters and memoirs of the period show that both men and women in the audience relished her swaggering, boisterous male impersonations which allowed her to portray the social and sexual freedom of the male Restoration rake.

Susanna Percival was born circa 1667 to actor Thomas Percival who was a member of the Duke’s Company. As most do, she took on the family business and became an actor at a time when women were finally permitted to be on stage. In 1681, at the age of fourteen, she performed in the King’s Company on Drury Lane in Thomas D’Urfey’s play Sir Barnaby Whig. In 1683, as a member of the United Company at the Dorset Garden Theatre, she performed in breeches roles where she became one of the leading actresses.

In 1686, Susanna married fellow actor William Mountfort who was also a playwright and who is credited with inventing the phrase “be still my beating heart,” a line in his play Zelmane. Not only did they perform together, but he also created more of the breeches roles for which she was so popular. Unfortunately, their marriage was short lived. A jilted admirer of Anne Bracegirdle erroneously concluded Mountfort was Anne’s lover so in a fit of fury, he killed him by sword.

A mere two years later in 1694, Susanna married fellow actor John Verbruggen. This was a union of necessity as Susanna had two young children from her previous marriage. Verbruggen was prone to violence and verbal abuse. This didn’t bode well as the theatre companies of the day were merging and reforming. Susanna continued performing at Drury Lane without her husband and remained as popular as ever.

In 1703, she succumbed to death during childbirth. Despite her immense popularity and significant contribution to English theatre, sadly no known photo remains of her.