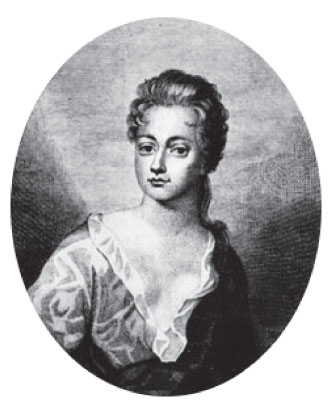 Bio
In 1679, Anne Bracegirdle began her acting career at the age of six playing the role of page boy in Mustapha, and in 1680, she again played the role of the page boy in Thomas Otway’s tragedy, The Orphan, both for the Duke’s Company theatre ensemble.

Anne was the daughter of Martha and Justinian Bracegirdle, who was believed to be a coachman. There are conflicting records on Anne’s life so the precise date and year of her birth is disputed, and therefore very little is known of her early life. It is widely believed she was born in 1673 in Northamptonshire, England. Due to financial ruin, her parents placed her in the care of actors Thomas and Mary Betterton where she learned her acting skills at a very young age. The Betterton’s were members of the Duke’s Company where Thomas Betterton was a big star so it was easy inroads for Anne to join the cast.

In 1682, the Duke’s Company and the King’s Company, two renowned theatre companies, merged to form the United Company. In 1688, Anne’s name first appears in playbills for the United Company where she became an important member as an audience and fellow actor favorite. In her notable acting career, she delivered at least nine prologues and twenty-one epilogues to her credit which is considerable stage time.

Aphra Behn, a poet, playwright and author, was one of the first English women to earn her living through writing. Behn specifically wrote breeches roles for women to showcase their emotional range and talent. The topics of her plays were controversial and would be considered feminist in todays view. Behn’s significant contribution was and still remains remarkable.

In 1705, Anne quit the stage as it became apparent that her rival, Anne Oldfield, was more favoured. Throughout her thirty year acting career, Bracegirdle often returned to breeches roles relishing the opportunity to display her wide range of talent. She made her final stage appearance in a benefit show for actor Thomas Betterton in 1709. She died in 1748 and upon her wishes was buried in Westminster Abbey.