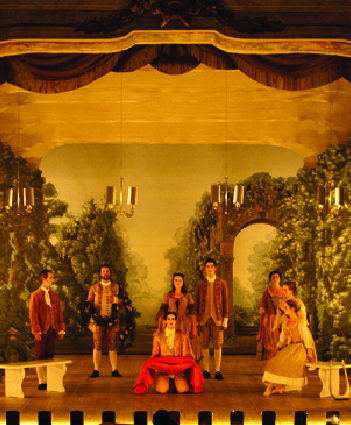 Elisabet Forsselius was a Swedish actress and opera singer who belonged to the esteemed group of performers who began The Royal Dramatic Theatre in Stockholm, Sweden in 1788 led by King Gustav III. In 1785 at the age of fourteen, she made her debut in a breeches role with favorable reviews. Due to her ingenue looks, she was able to play teenage boys in breeches roles up until her retirement from the stage in 1811. It is important to note that she excelled in a variety of roles not just breeches roles during her twenty six year career as an actress.

The Royal Dramatic Theatre was started by King Gustav III in 1788 for the Swedish people. Previously, all theatrical productions were presented only in the royal courts. The plays were from Italy and France and performed by court actors spoken in Italian or French. Gustav who was dubbed “the actor King” made swift changes by establishing a Swedish theatre with a Swedish theatre company performing in Swedish written by Swedish playwrights about Swedish life. He also created the Society for the Improvement of Swedish Speech. And Gustav was so enthralled with theatre, he wrote six plays himself and they were all performed within one theatre season.(1)

To accomplish his mission in establishing Swedish theatre, Gustav employed Jacques-Marie Boutet of the renowned Parisian theatre company Comédie Française to train actors. Theatre schools in Stockholm were created to educate and train budding Swedish actors. It is important to note that this became a means of education and possible employ for young girls from poor backgrounds. Because many of the plays had few or uneventful roles for women, some actresses made the bold choice to play breeches roles which generated considerable audience interest.(2)

Gertrud Elisabet Forsell, born January 23, 1771, is believed to have been the daughter of the clerk Jacob Forssell and Anna Magdalena Schylander and sister to the opera singer Gustava Rebecka Forsselia. In 1787, she married the composer Johann Christian Friedrich Hæffner and divorced him in 1807. The following year, she remarried the opera singer Johan Jacob Fahlgren, who was 15 years her junior, her ex-husbands former student and their tenant.

Forsselius was fortunate to have been affiliated with all of the great performing art groups in her time. In 1783, she enrolled in the Royal Swedish Opera. From 1785 to 1787, she was active with the Stenborg Theatre which was a less formal and less serious theatre than what King Gustav III created but popular nonetheless. In 1787, she joined the Ristell theatre led by Adolf Fredrik Ristell at Bollhuset which was Sweden’s first theatre and the first theatre building in all of Scandinavia. The following year, when Ristell fled the country due to bankruptcy, Gustav took it over to form The Royal Dramatic Theatre becoming its formal director. He placed the theatre under royal protection and had the actors form a board of directors to rule over the theater and meet every fourteen days to vote on measures. This rule proved to be chaotic yet lasted until 1803 when the actors demanded a director take over to replace this flawed system. (3)