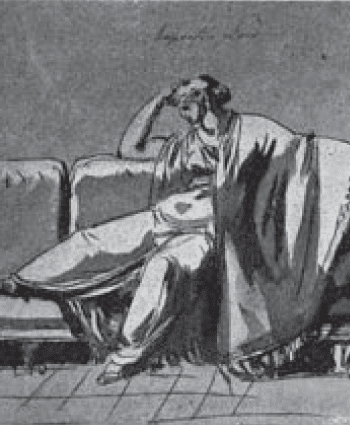 Bio
In 1791, Euphrosyne Löf made her successful stage debut at The Royal Dramatic Theatre in Stockholm, Sweden. Euphrosyne was among one of the first well-known Swedish actresses to play a breeches role. In 1794, Euphrosyne and actress Inga Aberg starred in the leading male roles playing August and Theodor in the play De begge kammarpagerna (The Two Valets) by Kexel. It is to be noted that she was also a refined ballet dancer in The Royal Swedish Opera.

The Royal Dramatic Theatre was started by King Gustav III in 1788 for the Swedish people. Previously, all theatrical productions were presented only in the royal courts. The plays were from Italy and France and performed by court actors spoken in Italian or French. Gustav who was dubbed “the actor King” made swift changes by establishing a Swedish theatre with a Swedish theatre company performing in Swedish written by Swedish playwrights about Swedish life. He also created the Society for the Improvement of Swedish Speech. And Gustav was so enthralled with theatre, he wrote six plays himself and they were all performed within one theatre season.(1)

To accomplish his mission in establishing Swedish theatre, Gustav employed Jacques-Marie Boutet of the renowned Parisian theatre company Comédie Française to train actors. Theatre schools in Stockholm were created to educate and train budding Swedish actors. It is important to note that this became a means of education and possible employ for young girls from poor backgrounds. Because many of the plays had few or uneventful roles for women, some actresses made the bold choice to play breeches roles which generated considerable audience interest.(2)

Euphrosyne (Euphrosina) Löf, born in 1772, was the daughter of Catharina Charlotta Stålhammar and Johan Gottfrid Löf, a taffeltäckare (literally table coverer) at the royal court. And she was the sister of the famed actress Fredrique Löwen who was among the pioneering group of actors who opened the Royal Dramatic Theater in 1788. Euphrosyne and her seven sisters were known to be high class courtesans in the royal circles of Stockholm which gave them access to higher education, political privilege, superior social standing and economic opportunities. In 1793 Euphrosyne became the official mistress to Prince Charles who later became King Charles XIII in 1809.

Despite her artistic and social successes, Euphrosyne is historically best known for her affair with Prince Frederick Adolf of Sweden from 1795 to 1800. This relationship was not favorable in many social circles and Prince Frederick ended it due to her alleged bad behavior. She was given a courtly stipend living a comfortable life until her death on July 1,1828.(3)