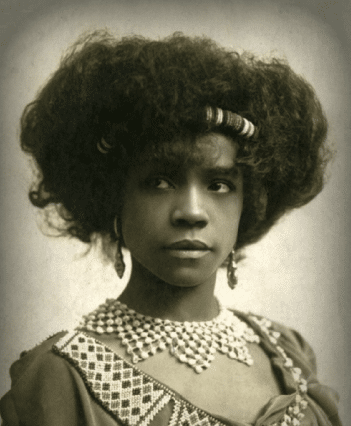 Aida Overton Walker was an immensely successful African-American actress, singer, dancer, choreographer, and male impersonator on the vaudeville circuit performing for black and white audiences which was rare for the time. In 1909, out of necessity, Aida became a male impersonator in the last few years of her illustrious career. When her husband, George Williams, fell ill in 1909 and susequently died in 1911, she assumed his role in their show, Bandanna Land, wearing his costume: a suit, straw hat, spats, white gloves and a cane, and singing his signature song, ‘Bon Bon Buddy’. Her rendition became so popular that she used the song and costume as a part of her solo act touring again with the Smart Set Company. After the dissolution of the Williams and Walker troupe and her husband’s death, she regained notoriety and the press took notice.

“When Aida Overton Walker tipped out upon the stage, it was the same big reception she had often received in the Williams and Walker Company. Not only was Mrs. Walker’s work most effective in “Lovie Dear”, her male creation was so clever and natural of the style of her husband that the audience went wild with enthusiasm.” (1)

Born on February 14, 1880, Aida began her career at age fifteen as a chorus girl performing and touring with John William Isham’s Octoroons. The following year in 1896, she joined the successful Black Patti Troubadours which was run by reknowned performer Matilda Sissieretta Joyner Jones who most likely mentored young Aida. On a side note, in June of 1892, Sissieretta became the first African-American to sing at the Music Hall, later named Carnegie Hall, in New York City. As members of Black Patti Troubadours, Aida Overton and George Walker met, fell in love and married.

In 1899 with comic Bert Williams, the Walkers went on to create their own highly successful and world renowned troupe, the Williams and Walker Company, where Aida served as the leading lady in all of their productions. Over a ten year span, they achieved tremendous international success as entertainers crossing racial and social divides with their elaborate theatrical productions which included song, dance, comedy, skits, and musical theatre. In 1903, Williams and Walker Company performed before King Edward VII and Queen Alexandra in Buckingham Palace, England. They staged ‘In Dahomey’ which was the first full length musical written and played by blacks.

“You haven’t the faintest conception of the difficulties which we must overcome, of the prejudices which must be left slumbering, of the things we must avoid whenever we write or sing a piece of music, put on a play or a sketch, walk out in the street or land in a new town”.(2)

Aida Overton Walker left behind several important legacy’s. She refused to play demeaning stereotypical mammy caricatures seeking to portray strong and positive images of black women. She actively fought for equality for black entertainers on and off the stage. She was hired by the white aristocracy to teach them the popular dances of the day. She became the first black woman to be accepted as a danseuse of the classics for her successful rendition of Salome. She lead her own vaudeville company.

And she was named “The Queen of the Cakewalk“. The cakewalk dance originated pre-Civil War on slave plantations during get-togethers. The dances were said to mimic white slave owners unbeknownst to them. The couple that performed the most entertaining or amusing dance would win a cake as their prize. Ever growing in popularity, the cakewalk became a part of minstrel and vaudeville show’s routines. Because Aida was an accomplished dancer and choreographer, her rendition of the cakewalk dance surpassed all others hence her legendary title.

At the young age of thirty-four, Aida Overton Walker passed away in New York City on October 11, 1914 from kidney failure.(3)

Casey, Kathleen B.. Cross-dressers and race-crossers: intersections of gender and race in American vaudeville, 1900-1930. New York: University of Rochester, 2012. 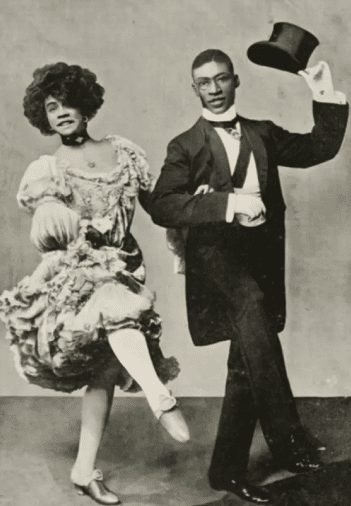 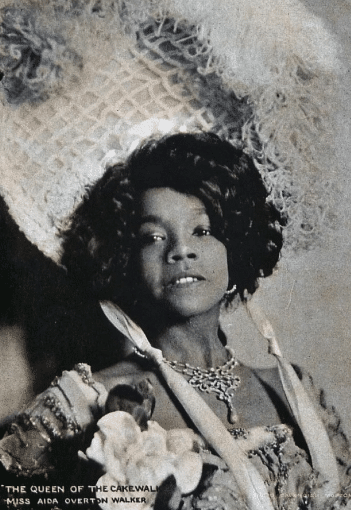