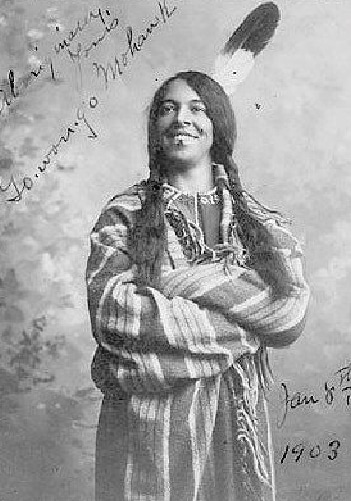 Bio
Gowongo Mohawk (August 11, 1860 – February 7, 1924) was one of the first American Indian actors to perform on the American stage and the first known American Indian male impersonator. She wrote, directed and starred in several productions that she toured throughout the United States and Europe. Through her stage career she became an advocate and activist for Native American rights.

Gowongo was born on August 11, 1860 on a Seneca Indian reservation in Gowanda, Cattaraugus County, New York to Chief and medicine man Dr. Alan (Ga-Na-gua) Mohawk and Lydia Hale. Her English-speaking name was Caroline A. Mohawk (Carrie) and she later chose to use her Indian name, Gowongo Mohawk, as her stage name.(1) She was an only child and her father died when she was nine years old. Her mother Lydia moved them to Ohio and in 1873 was remarried to Robert Killey. Lydia bore her second child, William Henry, yet died two years later when Carrie was fourteen. There is little else known about Carrie’s early life in New York and Ohio.(2) Some biographical details have been culled from the interviews in newspaper articles during her theatrical career though some could be fabrications used as publicity stunts. A few articles do mention that she attended an all girl school which could have piqued her interest in acting. ‘Many articles portrayed her as having enjoyed a childhood of riding horses, running, hunting, fishing, and rowing, all of which gave her the foundation for her physical strength and the ability to play male roles.’(3)

In 1879, at the age of eighteen Carrie married Civil War Veteran James E. Rider who was thirty-one. According to an interview in 1885, Carrie began her acting career in 1883. Her sister in law was notable actress Louise Pomeroy, and the person who first cast her in a small role in the play “The Outcast” which started her acting career. Many accounts say that Gowongo Mohawk got her start in show business by participating in Buffalo Bill’s Wild West Show yet there is no verifiable evidence to attest to this assertion. It is probable that she did see his show when it went through Ohio in 1880 and subsequently in 1883.

For the next six years, she played various female characters in many theatrical productions in notable cities such as New York and Philadelphia among others. During the production of “Michael Strogoff” in Philadelphia, she met her second husband, Charles W. Charles, who was also in the play. They married in 1889 yet both of them were not divorced from their first marriages. This caused quite a stir in 1892 when her first husband, James Rider, confronted the couple in Hoboken, NJ where they were scheduled to perform. Different sources claim different stories but suffice it to say, they were both attacked and Carrie missed at least a week of performance as a result.(4)

Between the War of 1812 and the Civil War, manifest destiny became the ideology that brought US imperialism to the forefront. Manifest destiny was the territorial expansion of North America from the Atlantic to the Pacific. In effect, it was a total disregard for the territorial rights of the American Indian people that wiped out many tribes and caused a great cultural divide. The belief that the expansion of the United States was divinely ordained justified this egregious behavior. With the expansion of the new-found frontier, opportunities and possibilities abounded for the growing population of white Americans. For those left behind on the East Coast, there was a growing fascination with the wild west.

The wild west was portrayed through the lens of white men’s experiences most notably showman Buffalo Bill Cody and historian Frederick Jackson Turner.
Audiences throughout North America were captivated by seeing American Indians up close and personal in traveling shows. In their reenactments of the violent conquest of the untamed frontier, Buffalo Bill Cody’s shows portrayed the American Indian people as wild, uncivilized savages and violent aggressors. Turner on the other hand told the story of a peaceful occupation of an empty land that was free for the taking. Nowhere in either of their interpretations or experiences of the expansion of North America did audiences or readers encounter the authentic American Indian experience.

The American theatre promoted the wildly popular frontier play which not only fed the public’s fascination with the wild west but reinforced problematic stereotypes. When Carrie decided to take control of her career, she wrote, directed and starred in her own theatrical productions where she chose to play the leading male roles christening her American Indian name Gowongo Mohawk. Not only did she confront American Indian stereotypes but gender roles as well by portraying male characters. In 1888, she wrote the play “Wep-Ton-No-Mah: The Indian Mail Carrier”, which was a five act melodrama set in the west. The play was action packed and included trained horses
and knife fights.The first production was in February 1889 held at the Standard Museum in New York City as recorded in the Brooklyn Daily Eagle. Unfortunately, the reviews were not favorable making the outrageous claim of inauthenticity as Gowongo was tall, thin, without an accent and light skinned rather than their image of American Indians as short and pudgy.(5) Undaunted Gowongo continued and caught the attention of the public as her play was one of the first to showcase and star a Native American performer. In the play’s program, she was billed as “The Only Indian Actress, in her great sensational and thrilling picture of frontier life”.(6)

From 1892 to 1897, Gowongo toured Europe performing her play to enthusiastic audiences eager to witness the myth of North America’s wild west. Upon her return she continued to tour throughout the U.S. and perform to full houses. Because of her theatrical success, she was able to expressly portray American Indians in a favorable way which made her a formidable activist for American Indian rights.

In 1900, Gowongo again starred in the leading male role in Lincoln Carter’s play “The Flaming Arrow”.(7) Similar to her own play, this play was also a five act melodrama set in the west, and she played an American Indian man in the leading role. Her character, White Eagle, competed for the attention of Mary, the daughter of the fort’s commander. White Eagle triumphed over the two male villainous characters to gain favor with Mary which entertained the notion of a same-sex and interracial relationship. Needless to say, Gowongo broke down many barriers in her theatrical performances. Her popularity soared and even a song entitled “Ga-Wan-Go Mohawk: Intermezzo in Two-step” was written in her honor.(8)

She died on February 7, 1924 and was laid to rest in Edgewater Cemetery in Edgewater, Bergen County, New Jersey. Her family home still stands as a historical monument in Greene, New York.(9) 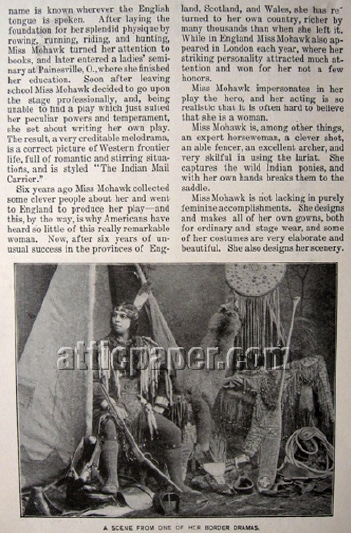 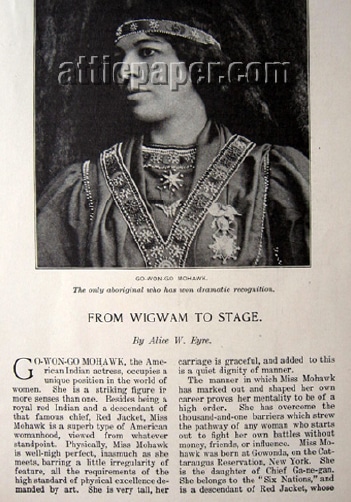 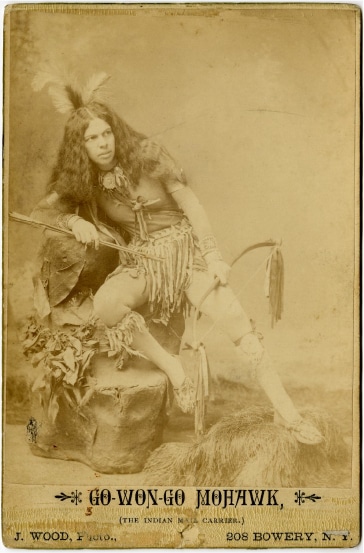 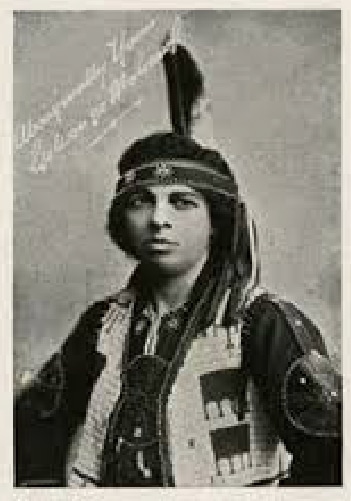 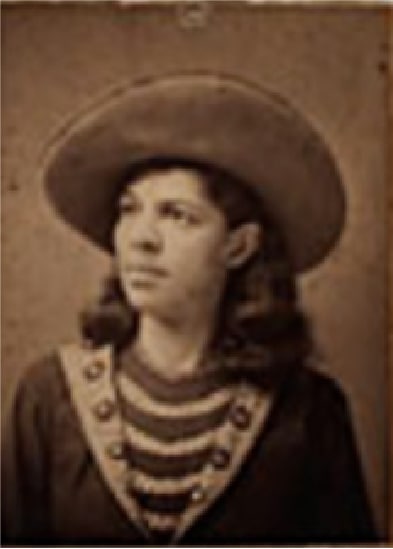 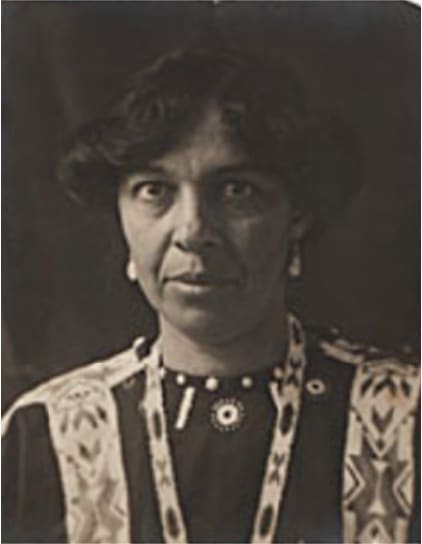 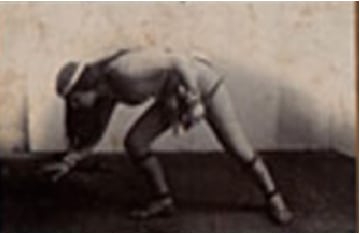 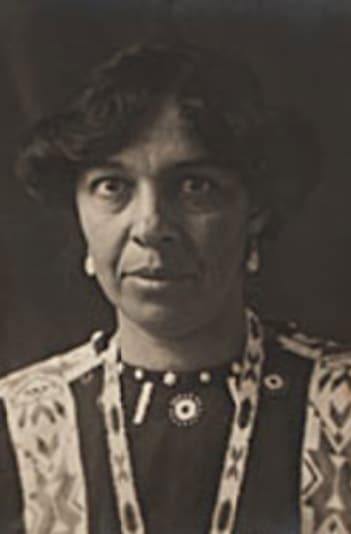 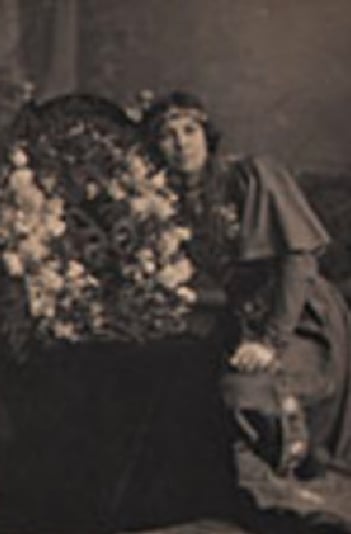 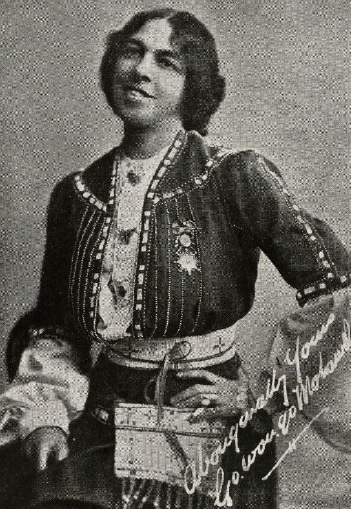 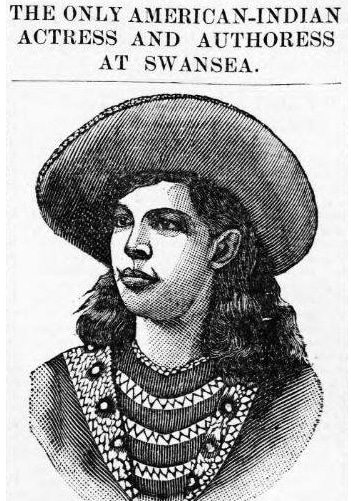 Otis, Melissa. “From Iroquoia to Broadway: The Careers of Carrie A. Mohawk and Esther Deer”. Carleton University, 2017.

Notes:
(1) United States Federal Census 1860 – Attica Village, Wyoming County dated July 28, 1860. Her father’s name has also been spelled as Ga-Ne-Gan. It is uncertain what name Carrie A. Mohawk was given at birth. The 1860 United States Federal Census for Attica, NY indicates the one year old was named Cora. However, Carrie A. Mohawk is used on several censuses and her first marriage documents so that is the name this article will use, along with her stage name of Gowongo, sometimes spelled Go Won Go. Other names used by those who wrote about her include Caroline and Carolina. For Carolina see “Local ‘Indian Princess’ made international splash,” The Daily Star (Oneonta, NY) Sep. 8, 2007. Online auctions of Gowongo Mohawk ephemera often use Caroline, for example see Cowan’s Auctions: The Midwest’s Most Trusted Auction House (ironically not much of the narrative they use is correct) accessed July 24, 2015, http://www.cowanauctions.com/auctions/item.aspx?ItemId=112439 . New York State Census 1865 – Town of Greene, Chenango County lists her as Carrie. Cuyahoga County, OH, Marriage Records and Indexes, 1876-1900, p. 190, Ancestry.com accessed November 14, 2015, http://interactive.ancestry.ca/1876/32365_

(2) Otis, Melissa. “From Iroquoia to Broadway: The Careers of Carrie A. Mohawk and Esther Deer”. Carleton University, 2017.Page 4. 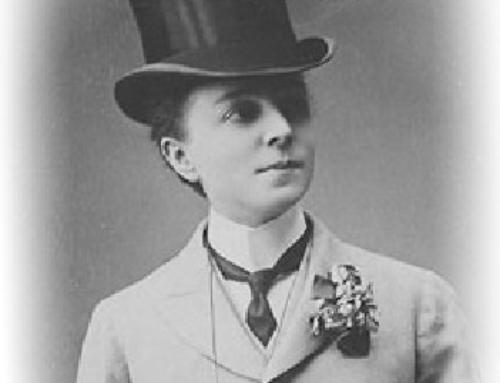 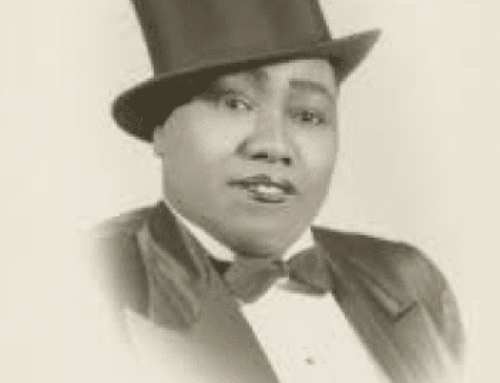 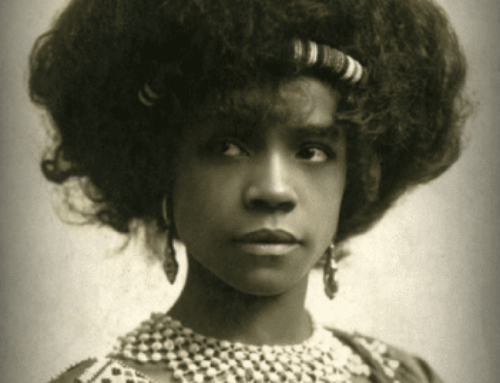 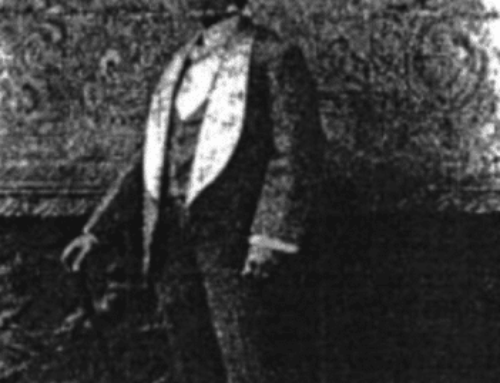 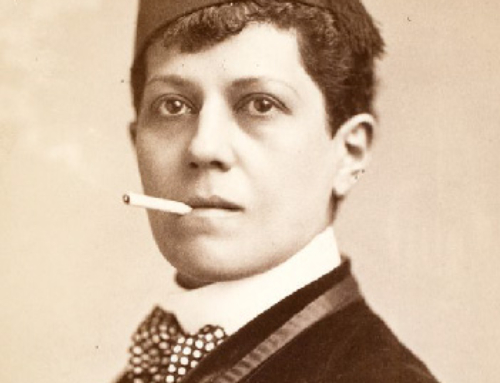